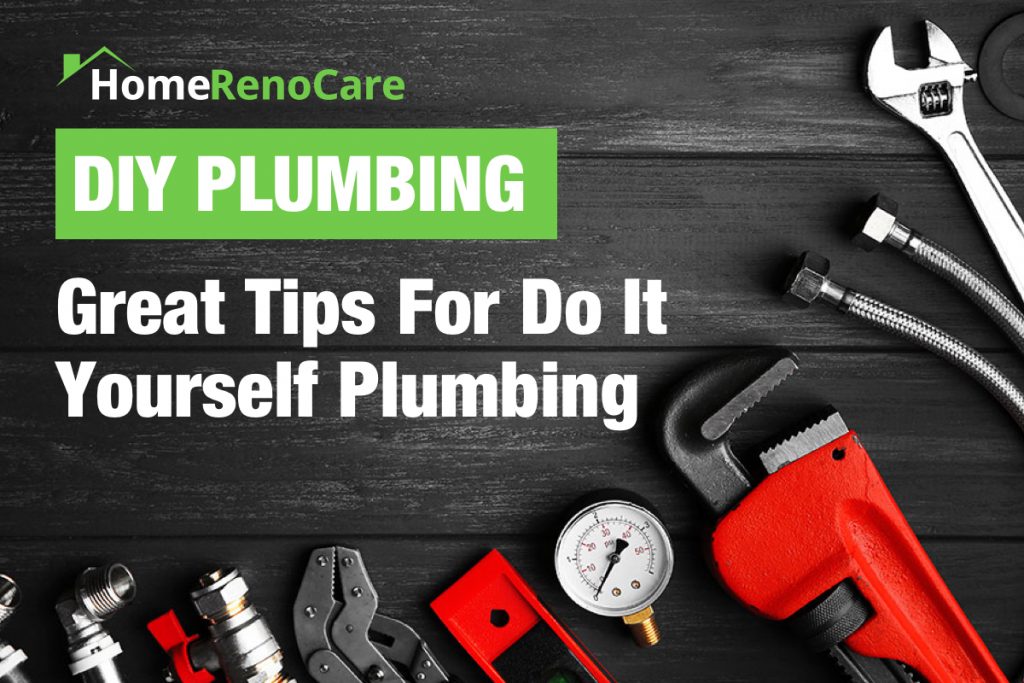 If you are a homeowner then you are probably looking to save money on household maintenance whenever you can. One thing you can do to save money is to tackle simple plumbing problems by yourself instead of calling in expensive professionals. While some plumbing tasks need the professional touch, a lot of them can be easily handled by a homeowner with a little know-how and some common tools. This handy guide will show you the tips and techniques needed to handle the problems you are most likely to face as a homeowner doing home improvements.

Basic Plumbing Tips for All Jobs

Shut off the Water

The first rule for any plumbing job is: make sure you shut off the water. The second rule is: Double check that you have done so. This will help you avoid a messy and potentially expensive disaster.

In general, you only need to shut off the water feeding the fixture you plan to work on. Fixtures have a valve on each of the pipes that lead into it. They are usually placed close to the fixture itself. Sinks have two types of water, hot and cold, so they have two valves. Toilets have one valve. Shutoff valves generally look like a lever, an oval, or an outdoor spigot handle. If you cannot locate the valve, then you will need to find and turn off the house’s main shutoff valve. This should be located near to where the main water line from outside enters your house. This is probably near the water meter.

Put a bucket underneath any pipes you are working on, if possible. Put a towel around the base of the bucket to catch the small amounts of water left in them after you shut the supply to them off. Lay a dropcloth down where you are going to kneel or lie down, if you don’t want to get wet or grimy. Keep a flashlight nearby mounted on some kind of prop or stand, so that you will be able to use both of your hands to work.

If your faucet is leaking, the problem is probably caused by a worn gasket. This should be pretty easy to repair. After you turn off the pipes running to the sink, open the taps and let the remaining water drain out. Place a towel in the bottom of the sink so that parts do not fall down the drain, and dropped tools do not chip the sink. Take the faucet apart. Take the old parts to the store with you, so that you can get the right replacements.

Compression Faucets: If the sink has separate handles for hot and cold, then it is a compression faucet. Pry off the decorative caps and then unscrew the handles. Underneath each handle is a stem on an O-ring sitting on top of a seat washer. If the faucet is leaking, then the washer is probably the problem. If leak is coming from the handles, then O-ring is probably the culprit. The O-ring is the thin circular bit on top of the flat, wide, circular washer. Replace the bad part, or both if you are not sure, and then reassemble the faucet. Coat the O-ring with plumber’s grease before putting it into place.

Cartridge Faucets: A cartridge under the handle indicates that the faucet is a cartridge faucet. Use pliers to remove the retaining clip. Pull the cartridge up and out of the assembly. Take off the spout. Coat the new O-rings in grease and then reassemble the faucet.

Poorly insulated pipes often freeze during the winter, and even well insulated pipes can freeze when the temperature is exceptionally cold. As a result, one or more fixtures may just stop working, and the frozen pipes can burst, leading to a serious flooding incident. Protect your pipes from upcoming cold snaps by opening one of the faucets on each line in your house, so that the water trickles out. Moving water can’t freeze easily.

If your pipes do freeze, set a hair dryer on high and direct it at the frozen pipes, if they are exposed. If the pipe is hidden behind a wall then set a portable heater up near it. Thawing a frozen pipe might take several minutes or even a few hours.

If one of your pipes is leaking, you can probably fix it with a minimum of effort. First, put a tube cutter around the leaking pipe just to one side of the leak. Tighten it and rotate it all the way around the pipe, then tighten it some more and rotate it again. Continue in this fashion until you have cut through the pipe. Do this again to the pipe on the other side of the leak, removing the bad section of pipe. To replace that section:

For PVC Pipes: Get or cut a section of pipe that is the same length as the one you cut out. Put primer on the exposed pipe ends and also inside two PVC slip couplings. Apply PVC cement to the couplings and pipe ends after this. Push the couplings over the ends of the broken pipe back a bit. Put the new section into the gap. Slide the couplings back over the joints and hold them in place for 30 seconds. Wait a 30 minutes before you run water through the pipe.

For Copper Pipes: Get or cut a piece of pipe exactly the same length as the bit you removed. Slip a copper slip coupling onto each end of the pipe you are trying to fix and push them back a bit. Brush flux onto each end of original pipe. Place the new section into the gap that you made. Slide the slip couplings back over each joint. Aim a small propane torch at the middle of a coupling, so that the tip of the flame just brushes it. Hold it there a few seconds until the flux sizzles. Touch some plumbing solder to the joint until it gets sucked in all the way around the joint. Repeat this procedure for the other joint. Allow everything to cool before using the pipe.

If the water in your toilet keeps running continuously then the first thing to do is to remove the tank lid. Inside, you will see a tube standing up vertically. If water is running over the tube’s top, bend the rod supporting the float ball so that the ball rests lower in the tank. If the chain on the bottom of is tangled so that the valve on the bottom can’t close, untangle it. If there is more than 1/2 inch of slack in the chain, adjust the chain’s anchor point. If these efforts fail to fix the problem, shut off the water running to the toilet, drain the tank by flushing, and then replace the fill valve.

If the toilet keeps flushing by itself then you have a problem with the flush valve seal. Check the lift chain. If it is tangled then untangle it. If this does not fix the problem then shut off the water line running to the toilet. Drain the tank by flushing it. Clean the underside of the flush valve using an abrasive sponge. Check that it is positioned properly over the opening. If it is not, adjust its position on its mount. If this does not stop the flushing, then replace the valve.

Most homeowners will face one or more of the problems described above at some point. These jobs are all simple enough for anyone to do, in general. However, sometimes a job will become far more difficult than it should for unexpected reasons. If you get in over your head, then you should call in a professional plumber, or you risk causing more damage than you repair.

Massive Source of Inexpensive Backyard Ideas for an Awesome Summer

Get all latest content delivered to your email a few times a month. Updates and news about all categories will send to you.